BACK TO PRESS RELEASES
Abbott Joins Forces with U.S. Department of Defense to Develop Portable Blood Tests for Evaluating Concussions ABBOTT PARK, Ill., Aug. 18, 2014 /PRNewswire/ -- Abbott (NYSE: ABT) and the United States Department of Defense today announced a collaboration with the intent to develop portable blood tests to help evaluate potential concussions, also called mild traumatic brain injuries (TBIs). As part of a multi-phased approach, the tests would be developed for Abbott's i-STAT® System, a handheld, diagnostic analyzer that is currently used for other point-of-care testing, including among military service members. Concussions are a significant health concern for military service members. [1] With the development of new tests, physicians could use the information to positively impact the care of people with a suspected concussion.

To view the multimedia assets associated with this release, please click
http://www.multivu.com/players/English/7293951-abbott-u-s-department-of-defense-develop-portable-blood-tests-concussions/

"The quick and accurate diagnosis of a concussion is critical so that soldiers who are affected--whether on the battlefield or not--can be removed from duty to recover and to prevent further injury," said Colonel Dallas C. Hack, M.D., Brain Health Coordinator, United States Army Medical Research and Materiel Command. "The Department of Defense collaboration with Abbott represents a major initiative to help improve efforts to understand this complex injury and care for wounded warriors suffering from this condition."

Research suggests that certain proteins are released in the bloodstream following a brain injury, such as a concussion. Data have shown that detecting a mild traumatic brain injury can be difficult since imaging technology may not show abnormalities and symptoms can be similar to or mistaken for other medical conditions. [2], [3]

"Medical advances are needed to help more quickly assess concussions. The collaboration between Abbott and the Department of Defense is an important step in ensuring that military service members, and ultimately civilians, receive proper evaluation," said Beth McQuiston, M.D., a board certified neurologist and medical director, Diagnostics, Abbott. "These new tests could open the door to many possibilities for evaluating concussions and helping clinicians optimize care and outcomes."

About Traumatic Brain Injuries (TBI)
A TBI is caused by a bump, blow or jolt to the head that disrupts the normal function of the brain.[4] A TBI is classified based on the seriousness of injury, from mild to severe. [4] The majority of cases, both civilian and military, are mild TBI (also called a concussion). [1], [4]

TBIs are common among United States military service members. According to the Department of Defense, since 2000, more than 300,000 service members worldwide have been diagnosed with TBIs.1 The majority of TBIs in the military – eighty four percent – are caused by training, accidents, illness and non-combat assignments. [5]

About Abbott Point of Care
Abbott Point of Care (www.abbottpointofcare.com) is headquartered in Princeton, N.J., and develops, manufactures and markets critical medical diagnostic and data management products for rapid blood analysis. The company's premier product is the i-STAT, a market-leading handheld blood analyzer capable of performing a panel of commonly ordered blood tests on two or three drops of blood at the patient's side.

About Abbott
Abbott is a global healthcare company devoted to improving life through the development of products and technologies that span the breadth of healthcare. With a portfolio of leading, science-based offerings in diagnostics, medical devices, nutritionals and branded generic pharmaceuticals, Abbott serves people in more than 150 countries and employs approximately 69,000 people. 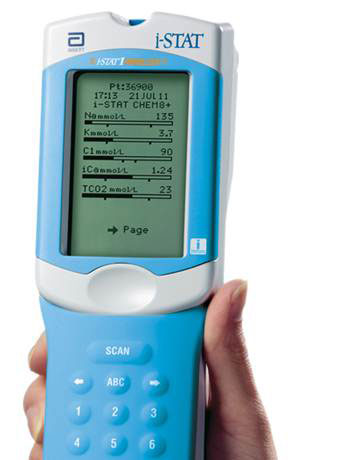 To view the multimedia assets associated with this release, please click
http://www.multivu.com/players/English/7293951-abbott-u-s-department-of-defense-develop-portable-blood-tests-concussions/