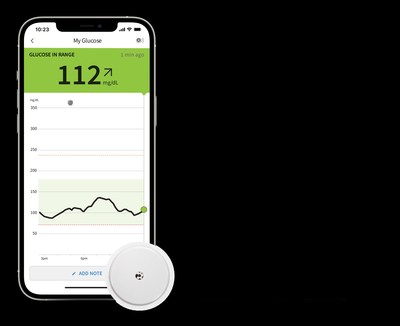 ABBOTT PARK, Ill., Oct. 6, 2022 /PRNewswire/ -- A new study published in The New England Journal of Medicine finds that for adults with Type 1 diabetes and sub-optimal glycemic control, Abbott's FreeStyle Libre® 2 glucose monitoring system provided significant reductions in glycated hemoglobin (HbA1c) compared to self-monitoring of blood glucose (SMBG), which were sustained for the study duration of 24 weeks.1 Use of the FreeStyle Libre 2 system was also linked to improvements in participant-reported quality of life outcomes, including overall satisfaction and reduction in burden associated with glucose monitoring.

HbA1c provides an estimate of average glucose levels over the preceding three months and is the standard measurement of glycemic control for people with diabetes.2 Increased HbA1c is associated with a greater risk of developing complications related to diabetes, such as cardiovascular disease, kidney disease and eye problems.3

"Continuous glucose monitoring has been a critical tool for people living with diabetes, both to avoid painful fingersticks and to help manage glucose levels," said study author Dr. Lalantha Leelarathna from the University of Manchester NHS Foundation Trust. "This data adds to the growing body of evidence that demonstrates the technology helps bring HbA1c levels closer to the target range, which ultimately decreases risks of further complications."

The trial included 156 people aged 16 years or older with Type 1 diabetes and HbA1c levels of 7.5% to 11%, none of whom had previously used continuous glucose sensing technology. For 24 weeks, half the participants were randomized to monitor their glucose with the FreeStyle Libre 2 system and the other half with SMBG.

The average HbA1c level of participants using the FreeStyle Libre 2 system was 0.3% lower at 12 weeks and 0.5% lower at 24 weeks, statistically significant compared to those using SMBG. FreeStyle Libre users also had a greater likelihood of reducing their HbA1c by a full percentage point by the end of the study period. They spent an additional 130 minutes per day with glucose levels in the target range (70-180 mg/dL) and 43 minutes per day less time with dangerously low glucose levels (<70 mg/dL).

The study is part of FLASH-UK, the first randomized clinical trial of the FreeStyle Libre 2 system compared to SMBG. It was led by a team at The University of Manchester together with investigators from eight centers in the United Kingdom (Birmingham, Cambridge, Derby, Dorset, Ipswich, Manchester, Norwich and Portsmouth) and funded by Diabetes UK. Abbott was not involved in the execution or funding of the study.

Abbott's FreeStyle Libre systems include a sensor, which is applied to the back of the upper arm for up to 14 days and continuously measures glucose, paired with a compatible smartphone app4 or reader that display glucose readings. The FreeStyle Libre portfolio is the number one sensor-based glucose monitoring system in the world5, having changed the lives of more than 4 million people across more than 60 countries6 by providing breakthrough technology that is accessible and affordable.7

Abbott (NYSE: ABT) is a global healthcare leader that helps people live more fully at all stages of life. Our portfolio of life-changing technologies spans the spectrum of healthcare, with leading businesses and products in diagnostics, medical devices, nutritionals and branded generic medicines. Our 113,000 colleagues serve people in more than 160 countries.

Connect with us at www.abbott.com, on LinkedIn at www.linkedin.com/company/abbott-/, on Facebook at www.facebook.com/Abbott and on Twitter @AbbottNews.

FreeStyle Libre 2 system: Failure to use FreeStyle Libre 2 system as instructed in labeling may result in missing a severe low or high glucose event and/or making a treatment decision, resulting in injury. If glucose alarms and readings do not match symptoms or expectations, use a fingerstick value from a blood glucose meter for treatment decisions. Seek medical attention when appropriate or contact Abbott at 855-632-8658 or FreeStyleLibre.us for safety info.

1 Leelarathna L, Evans M, Neupane S, et al. (2022) Intermittently Scanned Continuous Glucose Monitoring for Type 1 Diabetes. New England Journal of Medicine, Oct. 5, DOI: 10.1056/NEJMoa2205650
2 World Health Organization. Use of Glycated Hemoglobin (HbA1C) in the Diagnosis of Diabetes Mellitus: Abbreviated Report of a WHO Consultation Published. 2011. p. 2, Glycated hemoglobin (HbA1c) for the diagnosis of diabetes. Available online at: https://apps.who.int/iris/bitstream/handle/10665/70523/WHO_NMH_CHP_CPM_11.1_eng.pdf?sequence=1&isAllowed=y. Last accessed April 2022.
3 Sherwani SI, Khan HA, Ekhzaimy, et al. Significance of HbA1c Test in Diagnosis and Prognosis of Diabetic Patients. Biomarker Insights 2016:11 95–104 doi: 10.4137/BMI.S38440
4  The app is only compatible with certain mobile devices and operating systems. Please check our website for more information about device compatibility before using the app.
5  Data on file, Abbott Diabetes Care. Data based on the number of users worldwide for the FreeStyle Libre portfolio compared to the number of users for other leading personal use, sensor-based glucose monitoring systems.
6  Data on file. Abbott Diabetes Care.
7  Based on a comparison of list prices of the FreeStyle Libre portfolio versus competitor CGM systems available worldwide. The actual cost to patients may or may not be lower than other CGM systems, depending on local reimbursement, if any.